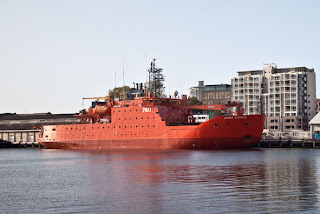 Most of Australia’s Antarctic and Southern Ocean marine science is conducted from the Aurora Australis, which is 94 m long and weighs 3900 tonnes. It can cut ice up to about 1.6 metres at a speed of around one to two knots through the heavier ice and up to 6 knots in the thinner ice. The ship has a trawl deck, oceanographic CTD system, and laboratory facilities designed especially for marine science research. The ship is also fitted with a heli-pad and hangar facilties and carries 2 Squirrel AS 350 helicopters.Aurora Australis was launched in 1989 and is also responsible for  resupplying  Australia's  three 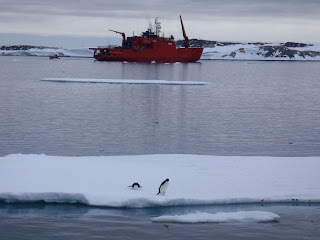 Antarctic   stations   each   year.  The   Aurora
regularly sails across the Southern Ocean where storms can generate 10 metre high seas and winds of 120–150 km/h.The ship has been known to roll up to 45 degrees in big swells. In these situations the angle of the deck is far steeper than any streets in Australia.A wide range of scientific experiments are conducted from onboard laboratories. On a six week voyage, the ship's kitchen can go through 4500 eggs, 1000 kg of potatoes and 280 litres of ice cream. The ship can produce up to 45,000 litres of fresh water per day for use on board for both drinking and other uses.The ship can accommodate up to 109 passengers.

See also a previous blog from 2010 on resupply. We'll be leaving Antarctica on the Aurora early April before the winter season starts.