Weather and Climate in Antarctica - According to a Boilermaker 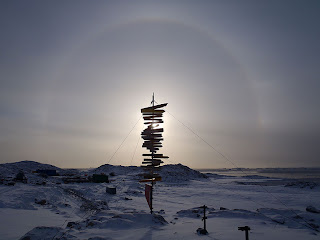 Antarctica experiences dramatic seasonal changes that result from the earth's 23.5 degree tilt. This means that for many weeks during midsummer it is light 24 hours a day. The reverse is experienced during winter when there is darkness for 24 hours in the day. See blog There Ain't No Polar Bears . Neither North or South poles receive much direct radiation from the sun, but the Antarctic is much colder than the Arctic for a variety of reasons. One is that there is eight times more ice in Antarctica than in the Arctic. The Arctic is primarily ocean, and water is  better than land in storing summer heat and moderating winter cold. A second reason is that with Antarctic's year round snow  cover,  nearly  80

percent of the incoming radiation is reflected back into the atmosphere. The sea by comparison, reflects only 5 percent, while exposed land returns 15 to 35 percent.
Temperatures decrease also due to altitude. Much of Antarctica has a very high altitude of some 2,286m. The lowest temperature recorded on earth was at the Russian Antarctic Station Vostok in July 1983. It recorded -89.2 C degrees. At this temperature steel shatters and water explodes into ice crystals.
Although Antarctica has more fresh water than any other continent, it receives the least amount of rainfall. Average rainfall is around 6cm. Antarctica is also the windest continent with wind blowing up to 320 kph throughout the year. The average daily wind speed at Casey Station where I am based this year has a mean daily wind speed of 37kph.
The air in Antarctica is very dry. The low temperatures result in very low humidity, which means that dry skin and cracked lips are a continual problem. Large quanities of water vapor are lost from the lungs as well, making it necessary to frequently drink water.
Take all this into account, it makes Antarctica a very inhospitable place for humans, but not a boilermaker....! 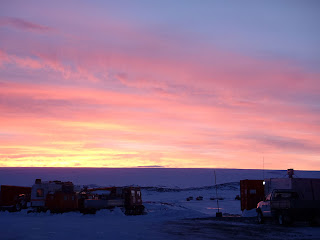 Posted by David Barringhaus at 11:52 AM