Davis Station. Where the Hell is That? 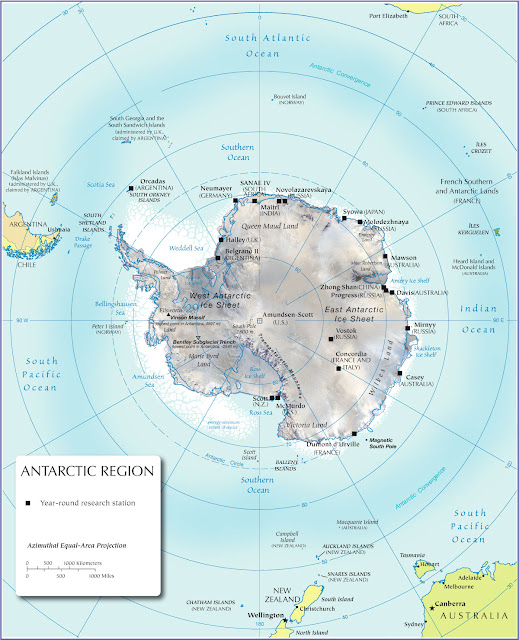 The following info is copied directly from Wikipedia and saves you the trouble of going looking up all sorts of other stuff as well. Told you I was a lazy bastard . . .! Oh, If your trying to find it on the map above, go to the middle of the map, that's where all the blue lines sort of meet in the middle. Follow the little blue line thingy to the right until you hit the coastline of the greyish blob in the middle and then follow the coastline to the top about 1 cm. There we are! Just near the East Antarctic Ice sheet.


See also my other blog Aerial Photography of Davis Station. These aerial images where taken by me on the 21 Feb 2012.

The first recorded sighting of the coastline now occupied by Davis Station was on 9 February 1931, during the second British Australian and New Zealand Antarctic Research Expedition (BANZARE) voyage aboard Discovery. Sir Douglas Mawson and Flight Lieutenant Stuart Campbell sighted the Antarctic continent from a seaplane and named the high land to the southeast Princess Elizabeth Land.

The first recorded landing in the region was made in 1935 by the Norwegian whaler Captain Klarius Mikkelsen in the vessel Thorshavn. Mikkelsen named the hills after the Vestfold province of Norway, on the western side of Oslo Fjord, which he considered it resembled, and where the Christensen company's headquarters was located, at the town of Sandefjord.


On 20 February 1935, together with his wife and seven crew members (including the ship's dentist, Lief Sørsdal), Mikkelsen landed in a small bay on an unnamed island at the northern end of the Vestfold Hills. Mrs Caroline Mikkelsen was the first woman to set foot on the Antarctic continent and the party raised the Norwegian flag on an improvised flagpole and built a rock cairn to mark the site. This cairn was found by members of the Australian National Antarctic Research Expeditions (ANARE) in 1960 but was lost for many years until its rediscovery in 1995. (As an interesting aside, Caroline Mikkelsen was still alive in 1996 and received word of the rediscovery of the original flag pole.) Captain Mikkelsen named the area "Ingrid Christensen Land" after the wife of the ship's owner, Lars Christensen. Mrs Christensen was later to land in Antarctica herself - on 30 January 1937, at Scullin Monolith (which the Norwegians called Klarius Mikkelsen Mountain).
The Thorshavn and Klarius Mikkelsen, along with Lars Christensen, were back in the Vestfold Hills area in the 1936–37 summer. An area to the immediate north of the Vestfold Hills was used as a take-off and landing area for a seaplane, from which oblique aerial photos were taken for mapping purposes. The first map of the Vestfold Hills, derived from this imagery, was published after WW2.
The next recorded visitors to the area were the American explorer Lincoln Ellsworth and his Australian aircraft pilot and observer, Sir Hubert Wilkins in Ellsworth's ship the Wyatt Earp. Despite Wilkins' protestations that Mawson had already claimed the area for Australia, Ellsworth planned to lodge a counter claim for America. In response to this, Wilkins took pre-emptive action and made two landings. The first was on one of the Rauer Islands, at 68° 46' South, 77° 50' East on 8 January 1939, and the second on a rocky outcrop at 68° 22' South 70° 33' East on 11 January 1939. At both of these locations he deposited decrees recognising Australia's right to ". . . administrate . . . those parts of His Majesty's dominions in the Antarctic Seas". Along with the decree he left a copy of the famous Australian geographical magazine 'Walkabout". Of three such sites, only the northern cairn has been located and hence the name "Walkabout Rocks".
During the U.S. Antarctic explorations that formed a part of "Operation Highjump" in 1947 the USS Currituck visited the area, but no landing took place. As part of Operation Highjump, the Vestfolds and surrounding were extensively photographed from the air.
The first ANARE landing in the Vestfold Hills was made on 3 March 1954 by Phillip Law, Peter Shaw, John Hansen, Arthur Gwynn and R. Thompson. They raised the Australian flag at Law Cairn, to the north of Davis Station, but had to return to their ship soon after due to deteriorating weather.
On 12 January 1956, members of the Soviet Antarctic Expedition landed on the Ingrid Christensen Coast, in preparation for the International Geophysical Year (1957–58). The Soviets did not stay for long but even today the Russian presence is betrayed by some distinctively Russian names on the map (Lakes Lebed, Zvezda and Druzhby among them) They later established their base at Mirny Station, some 350km to the east of Davis.
As Phillip Law recalled during a short visit to Davis on 11 January 1998, it was felt that if Australia did not establish a base in the Vestfold Hills the Russians would, and so in 1955 the Australian Government announced that a new station would be established in the Vestfold Hills.
A further exploratory visit was made by ANARE in January 1955 that involved two teams traversing much of the Vestfold Hills. During January 1957, an ANARE party led by Dr Phillip Law sailing on the Kista Dan attempted to locate a suitable site for the station. This proved difficult due to a lack of good ship anchorages and a scarcity of fresh water sources. On 12 January, after two days of attempting to find a suitable site, a last minute decision was made to locate the station on a small rocky plateau located above a black sandy beach. Unloading began immediately and, on 13 January 1957, a small ceremony was held to officially open the new station. It was named Davis " . . .to honour Captain John King Davis, a famous Antarctic navigator and captain . . . at present . . . living in Melbourne, a member of the ANARE Planning Committee". (Law's address on the day). After the ceremony, unloading recommenced and continued until 20 January when the Kista Dan sailed. The Kista Dan made a return visit to Davis later dropping off dogs and one more expeditioner.
Bob Dingle, Alan Hawker, Nils Lied, Bill Lucas and Bruce Stinear made up the first party to winter in the Vestfold Hills. The party was not completely isolated however as Auster aircraft flew between Mawson Station and Davis several times that year exchanging personnel and supplies.
Davis was temporarily closed on 25 January 1965 in order to make resources available for the rebuilding of Casey Station. It was reopened on 15 February 1969 and has been continuously occupied since that time. The original small huts ("dongas") fell into disuse and disrepair from the late 1970s / early 1980s, with a major rebuilding program.
Davis has become the busiest of Australia's Antarctic stations supporting a wide variety of scientific research in both the local and surrounding areas during the summer time. During the winter time, the principal research activity is Upper Atmospheric Physics.

For images that are for sale in print,canvas, framed print and acrylic go to my online store
Posted by David Barringhaus at 4:19 PM